Using Self Defense Against Protesters

Can you defend yourself and your property against protesters? 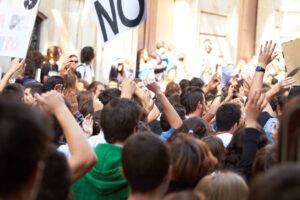 The recent disorder and riots around the country have generated interest in the topic – if you are assaulted or threatened by rioters how much force can you use to defend yourself, your family and your property?

Here’s a fairly common scenario. You’re driving in your car at night and a large group of protesters are blocking the way. You try to ease through them but they surround your car, maybe get on the hood and start banging on the roof and windows. I would argue that you have the right to slowly drive forward and if they don’t get out of the way and get hurt you would be justified. On the other hand, you would probably get into trouble if you floored it and ran over them.

What to do if protesters attack your car?

What if they start breaking your windows and windshield with bats or bricks? I would argue they were a threat to your life (and your family and any other passenger) and you have the right to escalate your force. If you reasonably believe they are trying to break into your car, or pull you out, then you have the right to use force to resist.

Texas laws on self-defense are found in § 9.31 of the Penal Code:

(b) The use of force against another is not justified:
(1) in response to verbal provocation alone….

This last part means that you cannot use force against someone just for yelling at you and insulting you.
We’ll look at the right to use deadly force in self defense in the next blog post.

If you have been charged with a crime in Texas, you definitely want the help of an experienced criminal defense lawyer to protect your rights. Contact the Law Firm of Richard L. Ellison, P.C. at 844-337-5819 or contact us online to arrange a.